Oh No! My Big Lots Products Tanked! What Now?

It’s 11:00p.m. and I’m sitting here with some Outkast (Roses) music playing in the background as I battle strep throat and I decided that there’s nothing I’d rather do than put in print some of my thoughts on products that tank.  I’m going to use some past Big Lots purchases because 1) I’ve written about shopping at Big Lots before and 2) Big Lots recently had their Friends and Family Weekend.  Following this weekend, many prices do fall and some people like to avoid the store altogether to avoid this.

I’ve said it before, but my strategy when you expect prices to crash is EITHER to be fast or slow.  What I mean by that is that when a huge increase in supply is not accompanied with a huge increase in demand, then prices must drop.  That said, we either need to be faster than the huge increase in supply or we need to be so slow that the huge supply runs out.  It can be hard to be faster.  Merchant Fulfilling some products is an option.  Shipping immediately to close warehouses can get you a day, etc.  However, I want to point out some examples where going slow has worked well for me.

It should be noted, this strategy is not best for people who are investing 100% of their available capital all of the time.  If that is you, it’s probably best to just sell as quickly as possible and get that money into other products ASAP.  That said, if your financial position and/or business strategy allows you to buy and hold some products, I want to show you how this can be profitable for you.

Before getting started, let’s note that buying and holding only works if holding will cause the supply to go down.  If this is some item that is in every WalMart in the country, it’s unlikely to work as well.  But, since Big Lots is a closeout store, a lot of times the products aren’t made/distributed any longer.  So, while a huge sale might initially bring a huge increase in supply, once those sellers run out, there’s nobody to jump in with more supply.

So, let’s look at some products: 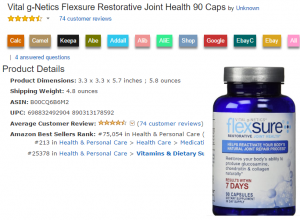 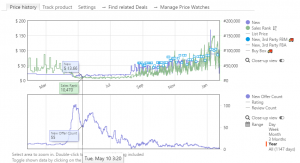 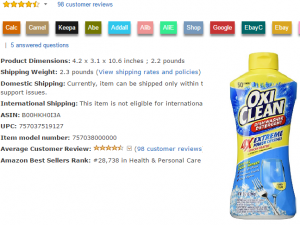 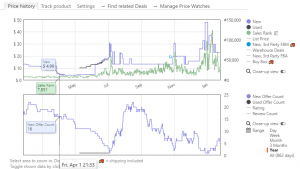 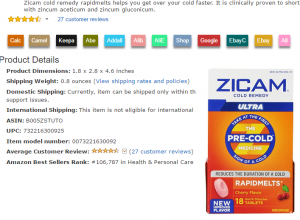 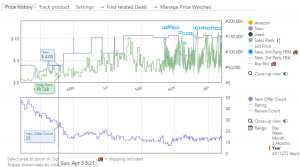 These suckers (and another one just like them) were $2 (so $1.60 on weekend).  I’ve had good luck with all sorts of Zicam products at Big Lots, so I think I probably bought these without even looking at the chart because the expiration date was 18 months away, so I was sure at some point I’d be able to make money on them.  I bought 24 of these and 24 of the other kind (hint: I would not suggest buying 48 units of something without checking the chart in most cases).  Sure enough, the price was low given the sale (as low as about $4).  So, I stuck these and the other ones in a case and forgot about them.  Once the weather started getting cold, I would bet money that these were selling better.  Sure enough, I opened up the listing and these were at $12.49 and the others were at $12.31.  I sold all 48 at those two price points, so exactly a $12.40 average.  That’s $5.97 profit on each x 48 = $286.56 on a purchase of $76.80 for an ROI of 268%.

It’s important to note that I don’t always employ a buy and hold strategy.  For example, there were some board games during Christmas that I ended up selling at around a break-even price.  Why?  I didn’t foresee a huge increase in demand (if anything, demand would be dropping markedly) and I didn’t anticipate some drop in supply.  If there’s no reason for me to expect a decrease in supply or increase in demand, there’s no reason I can expect the price to go up.  In cases like that, I’ll sell whether I’m going to lose money or not.  I’d rather take ‘bad’ money and turn it into ‘good’ money.  But in the case of these products (and others like them) I had good reason to believe that the supply would dry up while the demand would remain strong (cold medicines, joint medicines, dishwasher detergent etc., are always going to sell) or grow (it seems reasonable to believe that cold medicines will sell better in Nov-Jan than in Apr-Jul).  Because of that, I decided that a buy and hold strategy would be best.

One other factor to consider in the decision between holding and selling: Depending on when you buy and when you expect that you can sell, fees might be killer.  If you cross the long term storage (which I would on these) that will eat up a lot of profit, and a few cents each month.  Those start adding up.  But, since I expected that these prices would drop (or were already dropping) I was able to hold on to them.  I boxed them up securely and put them in my storage.  Hint: you want to do this in a temperature controlled area, boxed securely, etc.  Forgetting items in the trunk of your car doesn’t really count as “buy and hold”.

Hope that gives you a little insight into how I approach products at a store that has become more popular in reseller communities, but is also often derided as a store where prices tank.

Until Next Time, Best Wishes
Mike