[dropcap]I[/dropcap]’ve spent a lot of time getting to know various people in our FBA Master Facebook group.  In a lot of ways they are competitors, but they’re also partners.  In some cases, they become acquaintances or even friends.  Jason Wilkey, Chris’ dad, talks about about the value of networking with small groups of like-minded people.  I agree.  With those conversations, though, you often exchange more than just business information.  You learn a lot about people.  One of the things that some people have learned about me was that I spent considerable time as a professional poker player.  Many have asked that I write about this, so I ‘m going to try to do so in a way that isn’t just autobiographical, but actually useful for your business.

First, a note for anyone who actually plays poker (skip this if you don’t): This is not a poker post.  If you want to hear about me 5-bet shoving 100bb against a nit with an Ace-blocker, then we’ll have to cover that some other time. 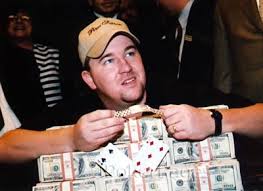 In 2003 an amateur poker player, Chris Moneymaker (yes, his real name) managed to turn $39 into $2.5 million in a series of tournaments.   It had the fortunate timing of happening when the technology for internet gaming was maturing, ESPN was broadcasting the World Series of Poker with the cards exposed for the viewer to see, and the economy had rebounded and was thriving. Nearly overnight, poker exploded.

I was part of this boom.  The idea of being able to make money playing a game just because you could think slightly better than your opponents intrigued me — always the consummate nerd.  The combination of a lot of college classes and a lot of laziness meant that I didn’t have a normal job.  Still, though, I wanted some money and I was just getting good enough at poker where I could do better than breaking even.  I wasn’t making an income yet, but I was making enough to make life a little more comfortable.  Ultimately, I graduated and went and got a real job like I was supposed to (Restaurant Management).  However, my fun hobby started to make me more money than work.  Nothing like making a four month’s salary by doing well in one 10 hour online tournament.  Combine this with the growing distaste for working nights/weekends/holidays and doing everything I could to make my boss more money, I ultimately left.

Poker treated me well until Black Friday.  In poker communities, Black Friday refers to April 15, 2011 (yes, tax day), the day the Department of Justice froze the accounts of the two largest poker sites.  Not only was the means for making money gone, but any money that we had on the site (thousands and thousands of dollars, most of the time) was locked up for years.  I was fortunate enough to live in Southern California, probably the best area for poker in America, so I was able to start playing at casinos.  I did well, supporting myself only by Poker for a long time, but it wasn’t a great long term option.  1)  Online, I could play 800 hands/hr, while in casinos you might get 30.  The two just aren’t comparable.  2)  Since poker is a recreational game, the amount of money is often determined by the economy.  The economy has not been great in years and this hurts the poker ecosystem.  3)  It doesn’t come with benefits/retirement/etc.  4)  A casino is really not a place you want to be 2000 hours a year.  5) Try explaining what you do for a living!  6)  The fluctuations are dramatic.  In nerdy terms, the Standard Deviation is so much greater than the expected winrate, that a solid winning player could easily go an entire year without making money.

For these reasons and more, I started to look at alternative options.  My girlfriend introduced me to FBA and I immediately told her what a dumb idea it was.  Nobody in their right mind was going to pay $15 for an item, when they could buy it from WalMart for $4.97.  Further, even if someone was doing that successfully, they’d surely never tell anyone else about it.  As it turns out, I may have been wrong (please don’t tell her).

[dropcap]I[/dropcap] think there are a lot of skills that I learned from Poker that translate well to FBA and  want to share a few with you: