Are list’s worth buying?

In my blog topic request email of a few weeks ago, I received one topic a few times. The wording was slightly different depending on who was asking, but the idea was basically the same :

Lists are many times controversial, part because skepticism is natural in every part of life. So why would someone sell a list of profitable items rather than just buy the items themselves?

There are several reasons, but notably, when Chris sent me the first BOLO item he sent me a few years ago, he said “I cannot possibly buy as many items as fast as I can find them.” At the time, that seemed and sounded insane. And this was in the pre-OAX  days.

Since then, as I have gotten better at sourcing online the number of potential items has grown. Combined with OAX, and using VA’s to outsource the finding of deals, lists have become a natural evolution. We sell the majority of ours through gumroad.com/fbam (sign up to receive notifications) and a list club (currently we are very limited in numbers, less than 20!).

{Do our lists occasionally have error items, mistakes, or other issues? Sure. Do I get emailed and then fix almost instantly. Absolutely. So if you are in the fence, give us a try and see!}

Here is my point. Because once I start I tend to ramble.

The positive merits of list buying have been told in various forms several times.

Those are two blogs right there, one by Brianna Moeller Green and the other by Chris Wilkey. Both give a ton of useful tips and info in regards to using lists.

But here is a main point that often gets forgotten, even though it is repeated constantly.

Before we even get into the cost cutting potential that people ignore, let me give you a great example.

Jason Wilkey has posted this item in his group, in the FBA Master group, on lists, and anywhere FBA sellers congregate. 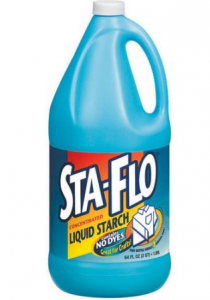 Available at every Walmart on earth.

I grabbed a few, and began selling at 15.95. There were always a handful of sellers on the listing, never crazy amounts. We got it up to 19.95 for a bit. The item is heavy, 64 ounces, so I imagine that frightens many sellers.

But I was making between 6 and 10 dollars each.

At the end of the run, it was ranked under 1500 in HBA, before Amazon finally wisened up and stole my replen! They began selling at the 10 dollar mark and killed it for me, switching to BISS where it ranks in the triple digits usually. But in it’s prime, I was selling almost 150 a month.

On an item that was on lists, posted in groups, and shared everywhere.

Yet nobody picked it up.

What does this have to do with lists?

Obviously in cases of clearance items, they cannot be replicated.

However, in the case of regular priced items, they can be researched further down the road and many times they rebound and become great items.

People are creatures of habit and continuously chase shiny new objects, and seldom go back and check history. Use this to your advantage. If you have lists from 6 months ago, check them out. You may be surprised.

Equally as important with lists, and often overlooked, is the various methods at getting your COGS down.

Here is a killer blog post and video from Assad Siddiqi with commentary by Mike, and it gives some great insight into stacking tips and tricks to lower your cost.

Once you learn how to do this consistently, you will quickly see profit pop up all over and it adds up quickly.

I almost never make an online purchase anymore without checking giftcardgranny.com for a discounted rate, or retailmenot.com for an online coupon code. Combined with cash back portals, you can often save 5-25%.

So in regards to lists, I do buy them, and I do sell them. I use them, and I keep a running spreadsheet of all the previous lists I’ve bought, so that I can go back and check items again in the future.

Does a race to the bottom exist or happen?  Sure, it happens.  But it often happens because of the items, not because of the list.  There are bottom races everywhere with retail items, and as you improve at sourcing you improve at avoiding those items.  So avoid the potential items that will crash in price, and you will improve your business.  This has more to do with experience and skill than anything else.

This is an exert from an email i just got today from Charles Ngo’s list, who is a prominent affiliate marketer.  He explains what happened when he spent 250 dollars on his affiliate project, his first one, and lost money.   He talked to his mentor, who told him the following : 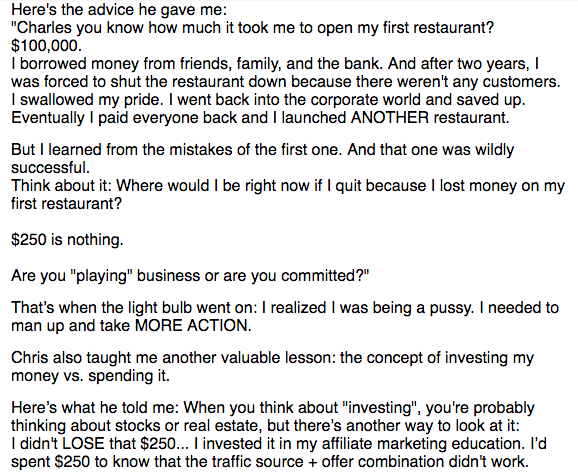 The point I got from that is that I must continue to learn, and I learn from every source possible.  I have bought lists just to see what they put on or think are good items, I have bought to check them in a month or two.   I invest in the learning, and follow rabbit trails.  The possible ways to make money are only limited by your creativity.

Hopefully this will give you some insight into why I believe lists are a good source of finding items to purchase for your OA business!